Identifiers (names of variables, functions, labels, or object member functions or interfaces (appear after a ".")) have the following rules.

BrightScript uses dynamic typing. This means that every value also has a type determined at run time. However, BrightScript also supports declared types. This means that a variable can be made to always contain a value of a specific type. If a value is assigned to a variable which has a specific type, the type of the value assigned will be converted to the variables type, if possible. If not possible, a runtime error will result.

The following types are supported in BrightScript:

BrightScript 3 has a few changes that affect types. These are hidden from the programmer, unless the new optional "3" parameter is passed to "type()". Without this parameter, "type()" will return a BrightScript 2.1 compatible type. These are the changes:

Here are some examples. Note: ? is a shortcut for the "print" statement.

When the BrightScript interpreter encounters an apostrophe (') or the statement REM, it ignores all following text till the end of the line. This has multiple uses:

Adding brief explanatory notes for the benefit of those reading it

Used to assist in explaining code functionality, by preceding a block of code or by following a statement on the same line, e.g.

Used to disable a line. "Commenting out" code snippets is a common developer practice, e.g. say to test what the outcome is without the line:

To comment out multiple lines, precede each of them with REM or apostrophe. To "block comment" big chunks of text, consider using conditional compilation.

In the XML part of the code, in order to comment or temporarily disable a line of code, you must use <!-- comment --> as in the following example:

Note that the apostrophe DOES NOT work within the XML environment. 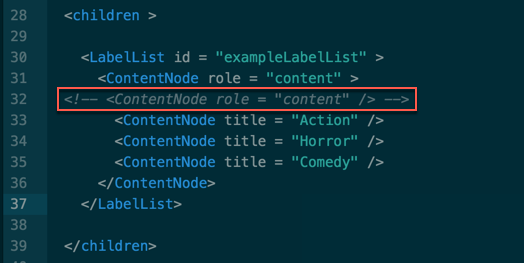 Type String: String in quotes, e.g. "this is a string".

This feature is available in firmware 6.2 or later.

This feature is available in firmware 7.0 or later.

The following rules determine how integers, doubles, and floats are determined:

The Array Operator [ ] can be used to declare an array. It may contain literals (constants), or expressions.

Arrays can be specified in multi-line form:

The { } operator can be used to define an Associative Array. It can contain literals or expressions.

Key names must be valid identifiers.

Key names can be specified as string literals.

Associative Arrays can be specified in multi-line form:

Note on Invalid vs. Object

Certain functions that return objects can also return invalid (for example, in the case when there is no object to return). In which case, the variable accepting the result must be dynamic, since it may get "invalid" or it may get an "object".

This example will return a type mismatch (a$ is a string, and can not contain "invalid"). Many functions that return objects can return invalid as well.

A type declaration character may be used at the end of either a variable or a literal to fix its type. Variables with the same identifier but separate types are separate variables. For example, a, a$, and a% are all different variables.

When operations are performed on one or two numbers, the result must be typed as integer, double or single-precision (float). When a +, -, or * operation is performed, the result will have the same degree of precision as the most precise operand. For example, if one operand is integer, and the other double-precision, the result will be double precision. Only when both operands are integers will a result be integer.

Division follows the same rules as +, * and -, except that it is never done at the integer level: when both operators are integers, the operation is done as float with a float result.

Effects of Type Conversions on Accuracy

When a number is converted to integer type, it is "rounded down"; i.e., the largest integer, which is not greater than the number is used. (This is the same thing that happens when the INT function is applied to the number.)

When a number is converted from double to single precision, it is "4/5 rounded" (the least significant digit is rounded up if the fractional part > =5. Otherwise, it is left unchanged).

When a single precision number is converted to double precision, only the seven most significant digits will be accurate.

Operations in the innermost level of parentheses are performed first, and then evaluation proceeds according to the precedence in the following table. Operations on the same precedence are left associative, except for exponentiation, which is right associative.

The function call operator "( )" can be used to call a function. When used on a function name, function literal, or variable containing a function reference, it calls the function.

When used for lookups, the dot operator is always case insensitive, even if ifAssociativeArray.SetModeCaseSensitive() has been called. By convention, a statement like:

To create mixed case keys, use the array operator or the ifAssociativeArray.AddReplace method:

See the section on XML support for details on using the dot operator on xml objects.

The "[ ]" operator takes expressions that are evaluated at runtime and so is different than the dot operator in this way.  Thus the "[ ]" operator can be used in situations where dot cannot, such as when the value of the index contains a character which is invalid in a variable name.

Arrays in BrightScript are one dimensional. Multi-dimensional arrays are implemented as arrays of arrays. The "[ ]" operator will automatically map a list of indexes separated by commas to the appropriate sequence of indexing. For example, the following two expressions to fetch "item" are the same:

If a multi-dimension array grows beyond its hint size the new entries are not automatically set to roArray.

If x is integer, float or double, -x evaluates to the negation of x, and +x is equal to x.

x MOD y is the remainder when x is divided by y.

Increment (++) and decrement (–) operators are available to allow integer increment and decrement to have effect on a variable. A few examples:

These operators are available in the 7.1 firmware version.

The following assignment operators are available to support mathematical and bitshift operations that take a numeric operand:

These operators are available in the 7.1 firmware version.

Given a number value, evaluated as an integer, and a shift value in the integer range 0..32, returns the integer value bitshifted accordingly.

A runtime error is generated if the shift value is out of range.

Note that right shifting treats the value as an unsigned integer, e.g. &hFFFFFFFF >> 1 is equal to &h7FFFFFFF.

This table describes the comparison operators.  All operate on either numeric values (integer, float or double) or strings.

Note that string comparisons are case sensitive.  For example, ("one" = "One") evaluates to false.

When AND and OR are used for logical operations, the clauses are evaluated from left to right, and only the necessary amount of the expression is executed (a feature sometimes called "minimal evaluation" or "short-circuit evaluation"). For example:

The above statement will print "ok" but will not call func, since the expression is true no matter what func returns.  On the other hand

will call func and print ok only if func returns a value of zero.

This feature can be used to write statements such as

Because of minimal evaluation, this will work correctly even when count is zero, while the following similar expression would not:

Note on the = Operator

"=" is used for both assignment and comparison.

BrightScript does not support the use of the "=" assignment operator inside an expression (like C does). This is to eliminate the common class of bugs where a programmer meant "comparison", not "assignment". When an assignment occurs, intrinsic types (numbers, booleans, strings) are copied, but BrightScript objects (native objects, arrays, associative arrays) are reference counted.