BrightScript Profiler is a tool created for collecting and analyzing channel metrics that can be used to determine where performance improvements and efficiencies can be made in the channel.

The BrightScript profiler provides the following metrics for a channel:

Each of the above metrics can be used to diagnose problems and provide guidance to the channel developer to improve channel performance.

The workflow of the BrightScript Profiler is as below:

Below is the list of manifest keys used by the profiler:

Running the profiler on a channel

To initiate the memory profiler, sideload, run, and then exit the channel. The profiling data is complete only after the channel exits.

Channel profiling can be paused and resumed at any time. Use the following commands on port 8080 to either pause or resume the memory profiler:

If the profiler is paused, very little data is written regardless of the data destination. This allows the profiling data (generally, the data relevant to specific parts of a channel's UI or other operation) to be collected and analyzed later. These two commands are particularly useful when combined with the bsprof_pause_on_start manifest entry.

The channel's manifest entry bsprof_data_dest determines how the profiling data is retrieved from the device. The data can be stored locally on the device and downloaded after the channel finishes running and exits, or it can be streamed over a network connection while the channel is running. Streaming consumes significantly less memory on the device while the channel is running.  In addition, if the channel fails, the memory data will have been accurately collected up until the time of the crash (CPU data, however, is typically lost if a failure occurs).

Local data storage is the default storage for profiling, though it can be explicitly selected by adding bsprof_data_dest=local to the channel's manifest. When using this destination, the data becomes available on the device's Application Installer after the channel exits:

In order to stream a channel's profiling data to a network while the channel is running, add bsprof_data_dest=network to the channel's manifest. Streaming data over the network is especially useful when profiling a channel's memory usage because all memory operations are included in the profiling data, and the amount of space necessary to store the data can be very large. By streaming the data to a network, the data size is limited primarily by the host computer receiving the data, and not by the available memory on the device itself. Even while streaming the profiling data to the network, there are still additional demands placed on the device's resources while profiling as compared to running a channel without profiling. However, the use of resources on the device is significantly reduced.

When this feature is enabled, the start of the channel is delayed until a network connection is received by the device, which is the destination for the data. When the channel is launched, a message similar to the following appears on the port 8085 developer console:

The URL is used with wget, curl, or a web browser. Once a connection is received from one of those programs, the following message appears on the developer console:

When the channel exits, the following message appears on the developer console:

Once that message is seen, the profiling connection is closed by the device and the remote file is populated with profiling data.

Disconnecting from the network during a profiling session may cause device instability.

After downloading the .bsprof file, the data can be viewed using the BrightScript Profiler Visualization Tool. The tool lists the function calls in each thread. For SceneGraph applications, each thread corresponds to either the main BrightScript thread or a single instance of a <component>. For example, if you have a Task node that is instantiated multiple times, each instance will appear as a separate thread. The results are the same for any custom <component> in the channel that is instantiated multiple times. The main BrightScript thread (Thread main) is also represented as a single thread even though it has no <component>.

For each function listed in the tool, you can expand it to drill down further into its call path and get more detailed data on the function. If you enabled line-level profiling for the channel, you can also click on the ellipses to the right of a function to view profiling data for the individual lines of code within a function. 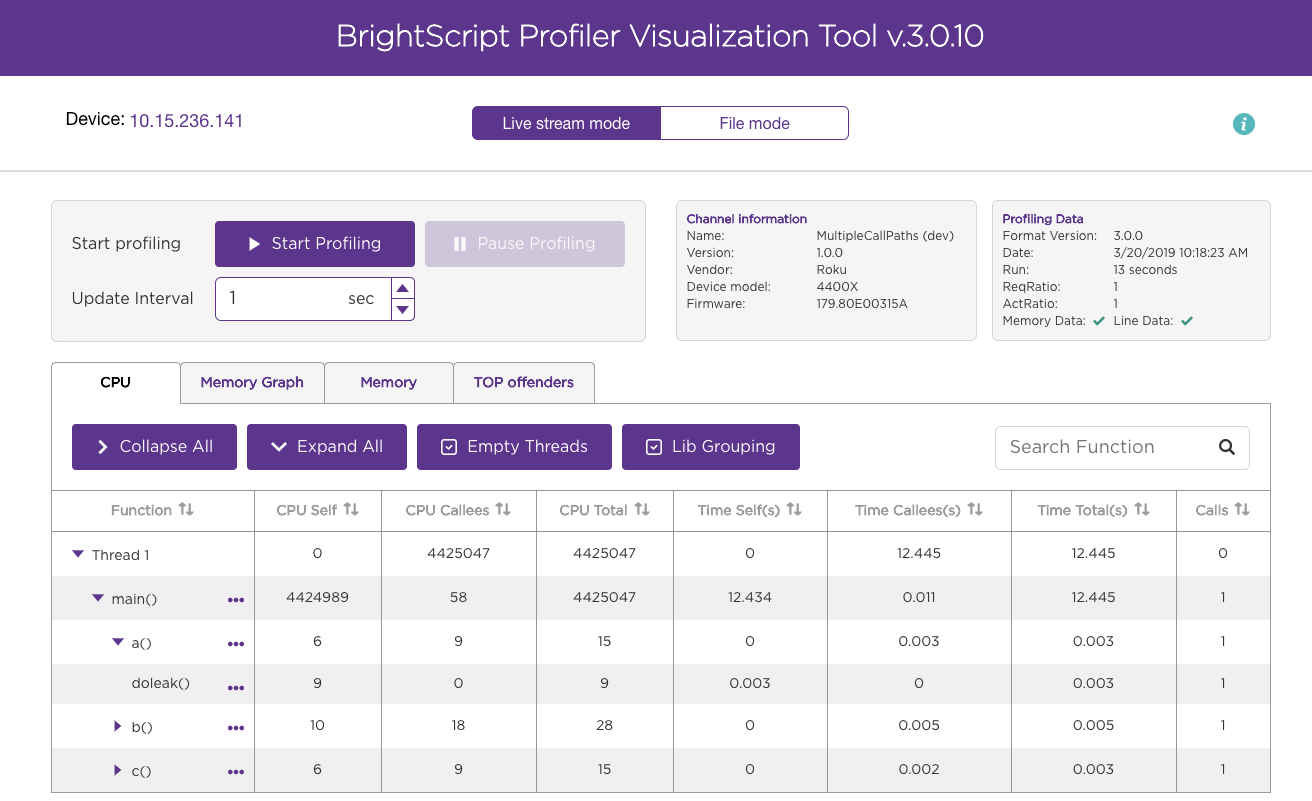 The CPU and wall-clock time columns are further divided into separate sections for self, callees, and total:

The Memory Graph tab visualizes the memory consumption for each thread in the channel application. Move the mouse pointer over a column to view the allocated, free, and unfreed memory for the thread. 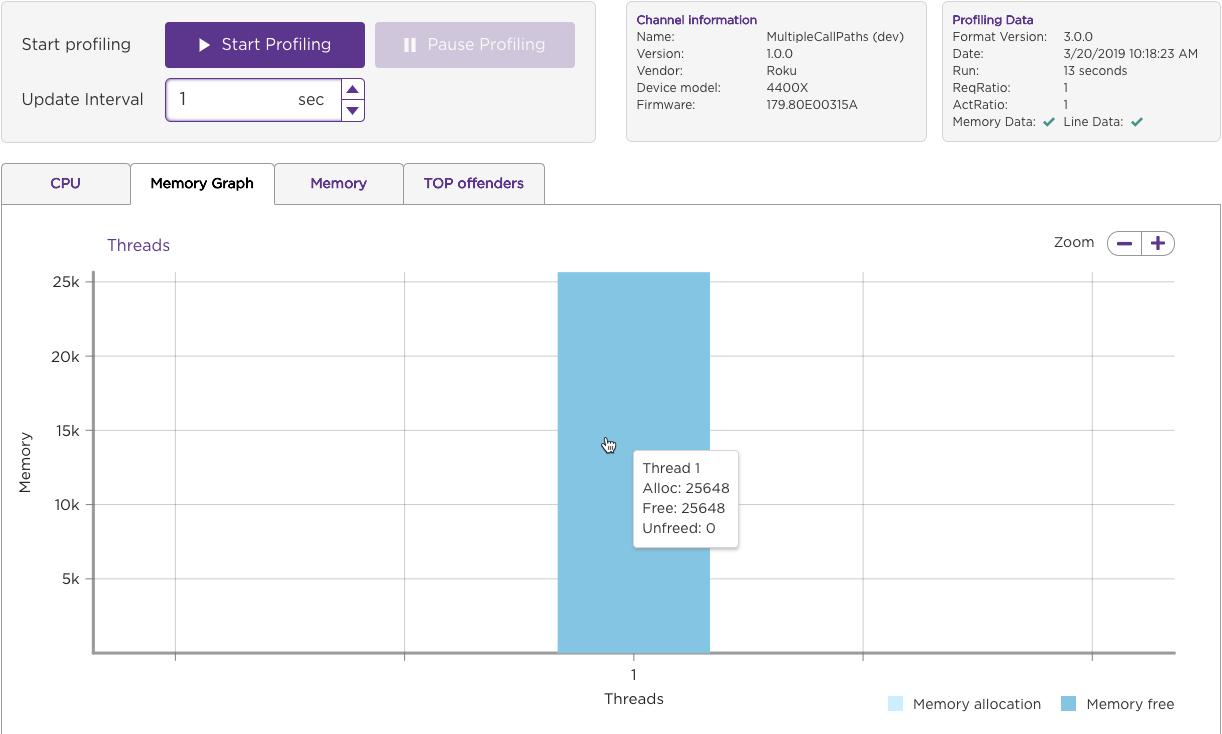 The Memory tab lists allocated, freed, and unfreed memory statistics for each function observed (self) and for the function's associated call path (total).  See Profiling Values for more information on the memory statistics displayed in this tab.

You can collect profile data for each line of BrightScript source code to better pinpoint high CPU and memory usage. To do this, enable profiling (bsprof_enable=1), line-level profiling (bsprof_enable_lines=1), and RSG version 1.2  (rsg_version=1.2) in the channel manifest. In the CPU or Memory tab, click on the ellipses to the right of the function to drill down into its individual lines of code.

The BrightScript Profiler lists the CPU or memory usage at the time the individual lines of code in the function were executed.

See Profiling Values for more information on the CPU and memory statistics displayed in the tool.

The following table describes the profile statistics displayed in the BrightScript profiler tool. The descriptions are applicable for the functions as a whole or for individuals lines of code in the functions (if using line-level profiling).

A “memory leak” is simply any memory that is allocated, but not freed while the profiler was running. If memory is freed while profiling is paused, the free memory is not tracked and the memory may show up as “leaked.”

Time is measured as if a stopwatch were used to time the action. For example, if a function makes a network call, there may be very little CPU time used, but a significant amount of time waiting for the network response.

If any of these metrics appear in a call path, they are specific to that call path. For example, in this call path:

The metrics for func2() are specific to when it is called from func1().

However, in the table below:

The Top Offenders tab displays the functions or function call paths that used the greatest amount of CPU, memory, or time. This tab is typically the best place to start diagnosing potential performance issues. The top 10 functions with the most unfreed memory are listed by default. You can change the report to a top 20, 100, 500 list or enter a custom depth, and you can select which metric to view. For example, the top 5 methods with the highest total CPU time are displayed in the following image:

Click Show call paths to open the CPU or Memory tab with more detailed profiling data for the selected function and metric.

Here are a few key points on how to use this data to improve channel performance: