The ZoomRowList node allows a row of the Row-Row Grid to smoothly zoom up to a larger size when that row has focus. Rows in this node are capable of gaining the focus while scrolling, and smoothly zooming up by the specified amount. The amount to zoom can be specified on a per row basis so that some rows can zoom up by a larger amount than others.

Anatomy of a ZoomRowList Node

A ZoomRowList is a vertically scrolling list of ZoomRowItem's. ZoomRowItem refers to a horizontally scrolling row or items plus any annotations such as title or counter. In the diagram below, the light blue rectangle identifies what's included in a ZoomRowItem. 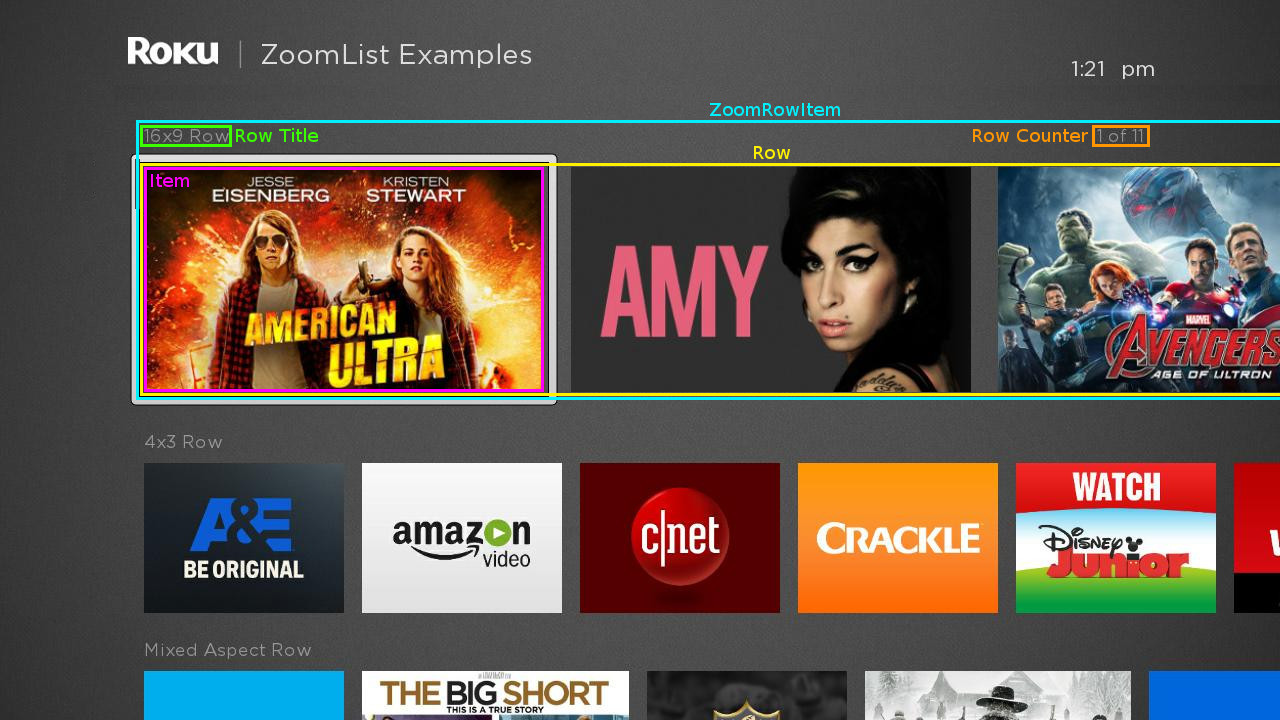 In some cases, Decoration is used to refer to all the parts of the ZoomRowItem other than the Row (i.e. the Row Title, Row Counter and Row Decoration). 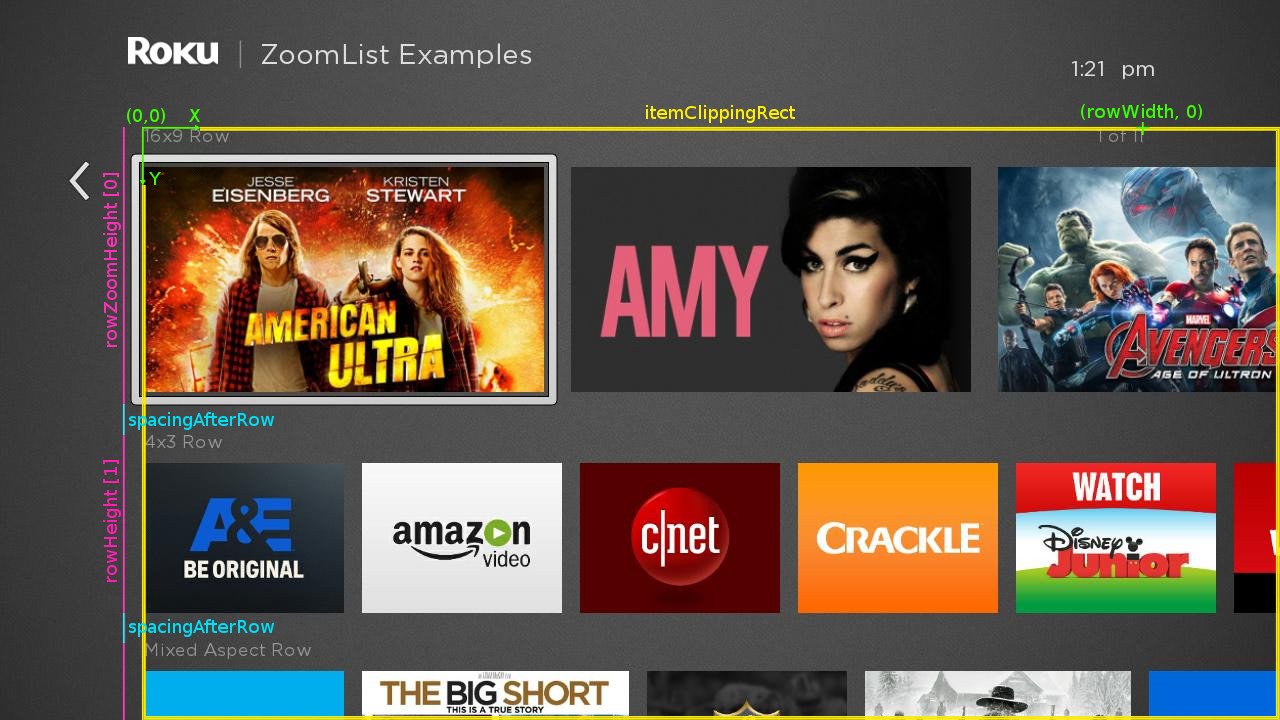 Similarly, the unfocused ZoomRowItem occupying the second row uses the rowItemOffset field to position its Row relative to the top of the ZoomRowItem's coordinate system. Similarly, the rowItemHeight field is used to specify the height of the items in the Row. The aspect ratio is used to compute the width of each item the height as above. The spacingAfterRowItem field is used to specify the horizontal distance between items in the Row. This spacing is zoomed up by the same percentage as the rowHeight as the row gains focus. 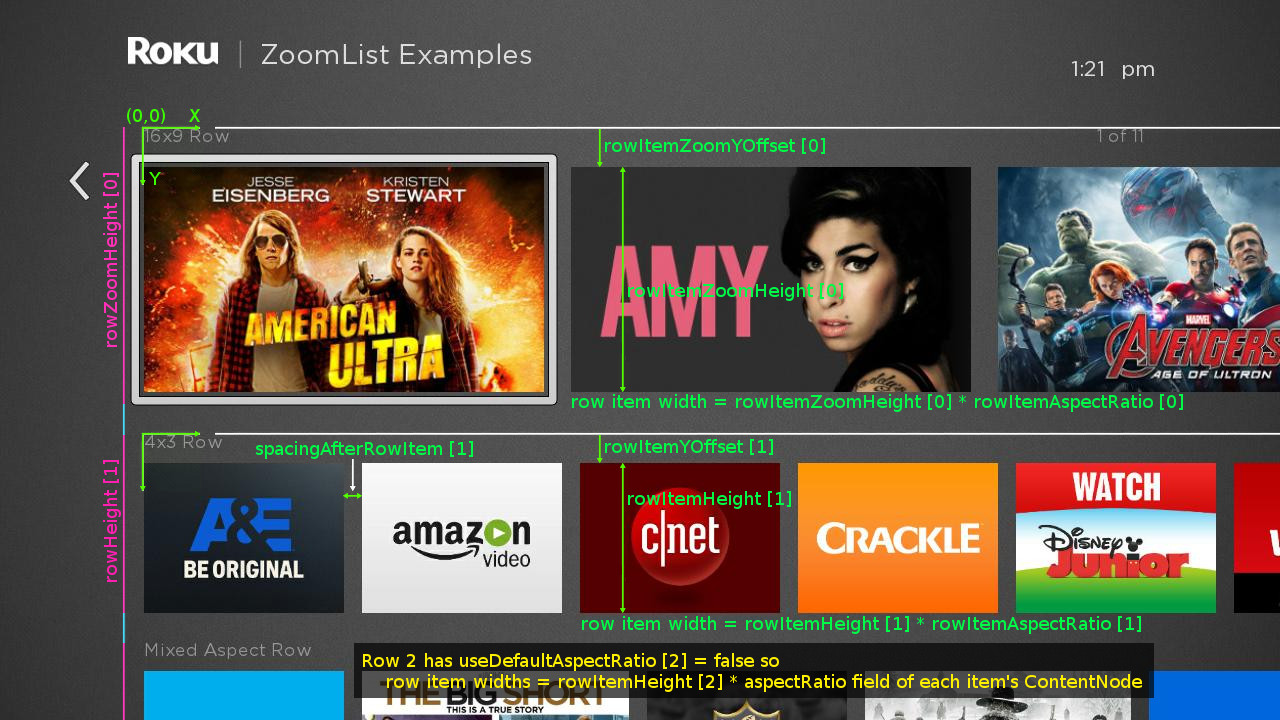 The illustration below is similar to the one above, but in this case, a custom Row Decoration component is used to display album details for the ZoomRowItem in the focused position. Observe in this case that the rowItemZoomYOffset for the zoomed row is much larger than the rowItemYOffset for the un-zoomed row. This causes the space between the top of the ZoomRowItem and it's horizontally scrolling Row of items to increase as the ZoomRowItem gains focus, allowing room for the album details to smoothly transition onscreen to fill that extra space. 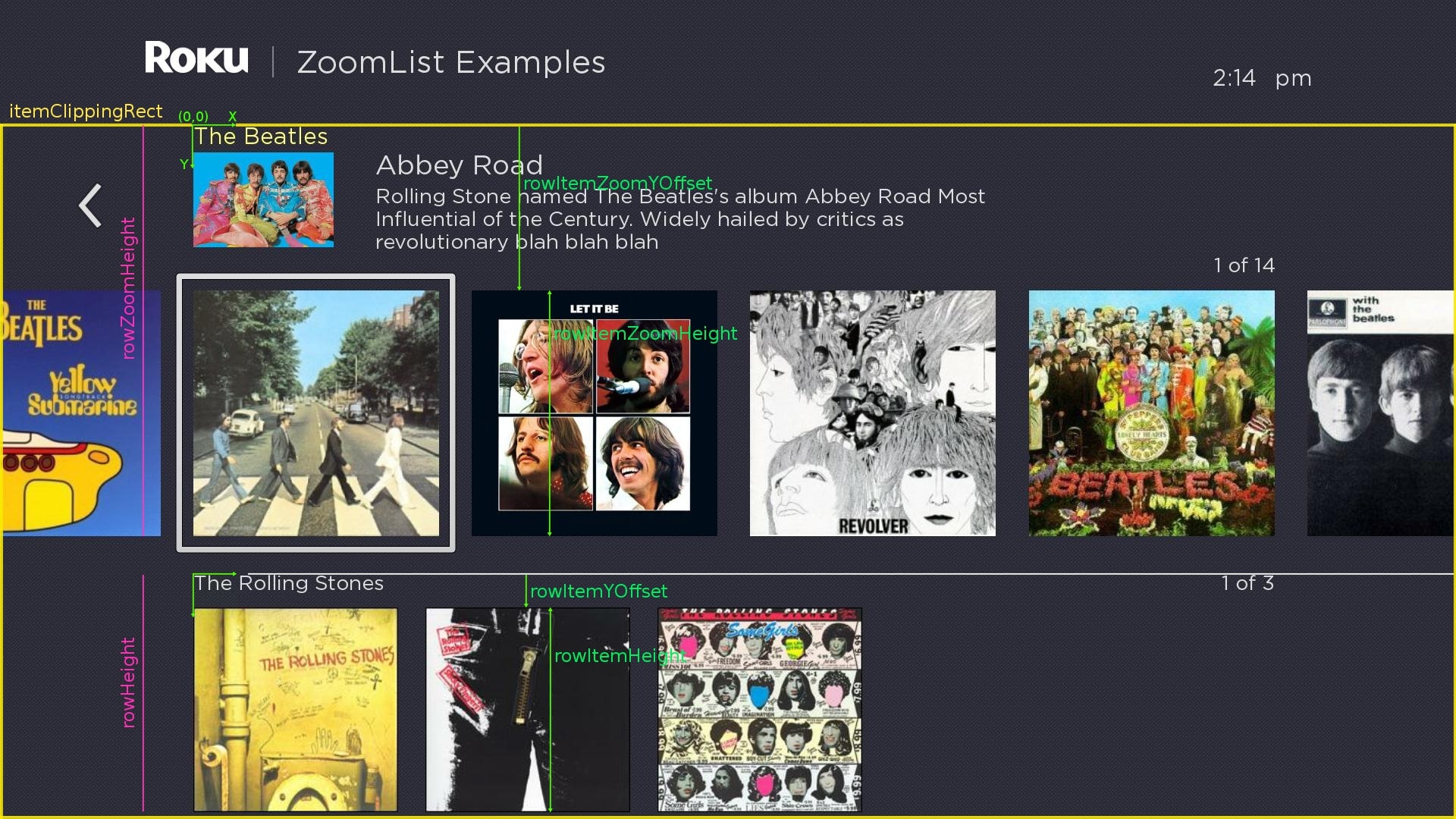 ZoomRowList extends Group so has all the fields of Group as well its parent class Node.

One common use case for these array fields is to specify a special value for the first row in the array (a Hero row) and a second value for all other rows. In that case, the field would be set to

This table documents all the fields in ZoomRowList:

Each Item in the ZoomRowList is rendered using a custom XML component specified by the itemComponentName field value. An instance of this component is created for each visible Item in each Row of the ZoomRowList.

If a RowDecorationComponentName is specified, an instance of this component is created as a child of each visible row's ZoomRowItem.