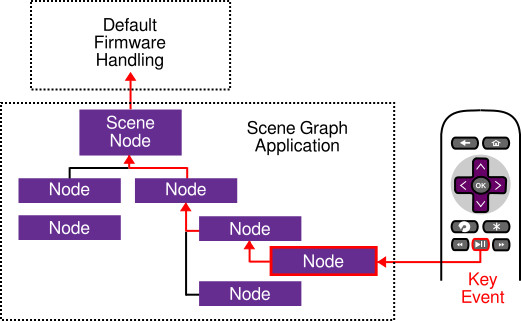 In many cases, there are default remote key event handlers built into the node classes supplied by Roku, and there are default event handlers that are not accessible by application developers as part of the Roku player firmware. If these default event handlers are called at any time as the event moves up the focus chain, the event is considered to have been handled, and a message to that effect is returned to the firmware, and no further action to handle the event will take place. For other events that are not handled by default, you have the option of handling the event, or allowing the event to move up the focus chain, and possibly not be handled at all.

Since they are derived from roSGNode, each node includes the ifSGNodeFocus interface functions for querying and manipulating the current remote control key focus status of the node. A special function is included in the SceneGraph API, onKeyEvent(), that allows you handle events, and return a message to the firmware that the event has been handled. These two features of the SceneGraph API allow you to selectively control the remote control key focus, and handle remote key press events, as needed for your application. See Handling Remote Control Key Presses for complete information on using these features to handle remote control key events.