SceneGraph applications can control the flow of screen elements in the following ways:

Many of the more complex SceneGraph node classes are designed to automatically respond to remote control key press events, and configure themselves in response to data changes.

As an example, for typical VOD applications, the following should drive the development of your custom SceneGraph components, and the program flow in the Scene node that displays these components as needed:

To continue with a VOD application example, a typical VOD application will first offer a set of video content categories for user selection, such as "New Releases", "Drama", "Comedy", and so forth. This should drive the development of a SceneGraph custom component that displays these categories, which will read the data from your server that you make available to the component to display the categories, including icons, text, graphic images, in either JSON or XML format. The data provided for that component should also include data to pass to another custom component, through the <interface> element or other means, to allow user selection of further sub-categories or video content items. All of the previous BrightScript component "screens", including "screens" for registration, search, license display, can be developed as encapsulated SceneGraph components, which can (and typically will and should) include their own components developed to provide specific appearance and functionality to several major components in your application.

The deciding factor to develop a custom component is whether it serves a discrete user interface purpose to display certain types of data to the user, and react to user selections and input related to the data. Again, as an example, the first component you might typically develop for a VOD application would be the first menu of video categories. As a user interface design choice, you may have decided to use a vertical list of text strings ("New Releases", "Drama", and so forth), each with a small icon representing each category to the left, and a larger poster graphic image to the right of an example video chosen at random to represent the category (for example, a poster image for the movie Argo for the "Drama" category). On your server, you must make available a JSON or XML file containing the necessary data and links to data and graphic images that you have written from your content catalog database to support the data needs of the component. The component itself will consist of the ability to access the required data, and the selected node classes and component behavior to display the data according your user interface design for that screen element.

This is how you might want the list to appear and behave, with the category poster appearing along with a red underline cursor under the focused item: 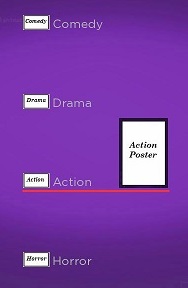 For the VOD category list example, the first step might be to write a SceneGraph component outline similar to the following:

You can then select the nodes to comprise your custom component from the SceneGraph API node classes, to either create or modify them using BrightScript in the <script> element, and/or declare/define them in XML markup in the <children> element. For example, for a list of categories, you might want to use the LabelList node class, or perhaps the MarkupList node class, since you intend to include graphic images as part of your list. You will also use two Poster node classes somewhere in your component for your icon and poster graphic images, perhaps as part of another custom component that is the definition of the itemComponentName field of the MarkupList node. You complete the component by adding <interface> element fields as needed to get and set data that is either needed for the component, or passed to other components and/or the Scene node BrightScript program flow.

For the example VOD categories list, we should use a MarkupList node, because we want to use custom graphic images as part of each list item. So we need to start work on a custom item component for the MarkupList node itemComponentName field. This custom item component is where we will define the individual sub-elements that make up this screen element component, their SceneGraph node type and position, size, and other attributes, and how they will appear as focus moves from item to item. So we start with the following outline:

The outline includes the Poster nodes we will use for graphic images, a Label node for the item string, and a Rectangle node we will use as a cursor to indicate focus on the item. It also includes the <interface> itemContent field to set the Poster node URIs, and the text string for the Label node, with the showcontent() function in the <script> element setting the required fields for those nodes when the MarkupList node creates each instance of the item component.

To complete this component, you would need to specify the local coordinate locations of each of the renderable <children> nodes according to the design of the user interface, and any other behavior you want for each list item, such as when it becomes focused and/or unfocused. For this design, we want only the text of each item and the corresponding icon to be visible when the item is unfocused, and make the cursor appear below the item, and the corresponding poster appear to the right, when the item is focused. So, for example, we set the itemPoster sub-element in position in the item definition with an initial opacity field setting of 0.0 to make it invisible until focused:

Then we can write the <script> element callback function showfocus() to indicate focus when the focusPercent <interface> field changes:

Then you assign your item component to the itemComponentName field for your MarkupList node component, as part of completely defining your custom category list:

MarkupList.zip is an example application of the completed custom list configuration. In the example application, note that the file markuplistcontent.xml is the ContentNode node component that supplies the data to populate the list; normally this data would be in a XML/JSON file that would be downloaded from your server to the application and converted to a ContentNode node using a Task node (or equivalent). Also note that the icon and poster files are included in the package images directory, rather than your server, and the markuplistscene.xml is only provided to allow the example to run as a standalone application.

For an example application that uses three custom components, and creates and sets focus on the custom components as needed in reaction to user input in an OverhangPanelSetScene node, see Sliding Panels Example.

There are two more examples that allow users to select and play videos from a custom RowList node: