Lists and grids are important screen elements for the application user interface. Lists and grids allow the user to choose from a selection of items that, for example, can include the title of movie to rent or purchase, and a graphic image of the theater poster for the movie. The SceneGraph API allows you to include several data items for each item in the list or grid, such as the price to rent or buy the movie, and to display this information to the user when the user selects the item.

The following are the list and grid node classes supplied by Roku as part of the SceneGraph API:

For lists, the index starts at 0 for the item at the top of the list, and increments for each item lower in the list:

For grids, the index starts at 0 for the item at the top left corner of the grid, and increments for each item to the right in the grid row, and when the end of a row is reached, increments for the left-most item in the next lower row, and continues incrementing from left to right and top to bottom for each row in the grid. For example, if you specified a 3-column grid (by setting the numColumns field to 3 as described in List and Grid Layout Options), the index would increment as follows: 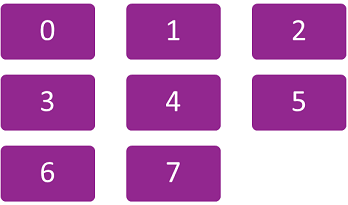 SceneGraph also provides another type of list/grid node class, RowList, that combines aspects of both lists and grids. See RowList Node Class for information about this hybrid node class.

You can use the ObserveField() interface function for the list or grid node to trigger a callback function in response to changes in these fields. For example, the following calls a displayepisodeinfo() function that could provide additional information to the user as the focus moves to an item in a list of TV program episodes:

Likewise, if the user selects the item by pressing the remote control OK key, you can write a playepisode() callback function triggered by the itemSelected field event to begin playback of the selected episode:

Since the index number for each item is the position of each child item in the ContentNode node that defines the list or grid, you can use them to retrieve data from the child ContentNode node associated with the item (or also from parallel arrays you have created for this purpose). This allows you retrieve the data needed to write the callback functions that are triggered by the list or grid item field changes. For example, the following accesses TV episode data in the ContentNode node for a list using the getChild() interface function taking the itemFocused field value as the argument, as part of a callback function to display TV episode information for the focused episode list item:

The list or grid node class also provides options for automatically indicating to the user that focus is on an item. The item can have a different color, or a bitmap drawn on the item, to indicate focus. The list or grid node class includes default 9-patch PNG bitmaps that surround the selected item, as well as an automatic text color change for lists of label items, but you can also customize these focus indicators for your design. The fields used to customize these options are:

If you want a custom focus indicator that cannot be defined using these fields, you should use one of the node classes described in Custom Item Definitions and Focus Indicators.

You have many options for arranging and displaying the items in a list or grid. Specific options depend on the type of list or grid you want to display.

The fields to set the appearance of section dividers are:

The RowList, MarkupList, and MarkupGrid node classes provide the ultimate flexibility to present lists and grids with fully-customized item appearance and focus indicators. These node classes allow you to create a custom component for list or grid items to define whatever appearance and behavior you want for your application. If you want to have several posters with multiple labels in each list or grid item, and animate them to appear and disappear as the item is focused and unfocused, you'll want to use these customizable list/grid node classes.

The key to customizing these node classes is to create custom item definitions in a component XML file. You define all the screen elements you need for your custom list/grid items in this item component file, such as posters, labels, rectangles, and so forth. Then you can create custom appearance and behavior for the items by writing callback functions triggered by onChange events in the <interface> element fields you select for the item. These customizable list/grid node classes provide a much greater selection of built-in <interface> element fields than those provided by the standard list/grid node classes. These additional fields allow you program custom appearance and behavior of the item, such as custom animations when the user focuses/selects the items.

The additional read-only <interface> element fields for item components in these customizable lists and grids are:

The RowList node class is a special list/grid node class that mixes aspects of both lists and grids. A RowList node component consists of a set of one or more rows of items, each of which, when focused, scrolls horizontally as the user presses the Right or Left keys to focus on items in the row. Items in other rows in the list do not scroll along with the focused row as they would for a grid. To focus on another row, the user presses the Up and Down keys to select the row, as they would to focus on items in a list.

The additional read-only 2-element fields containing the item focused/selected are:

The RowList, MarkupList, and MarkupGrid node classes provide special <interface> fields for item component definitions that enable animations to indicate focus changes to the user. The focusPercent field can be used with an onChange attribute callback function to animate focus indicators as focus moves from item to item. The focusPercent field is the fractional value, from 0.0 to 1.0, of a time delay after focus has moved from one item to the next. The fractional value increases incrementally from 0.0 to 1.0 for the newly-focused item, while simultaneously decreasing from 1.0 to 0.0 for the previously-focused item. For example, to enlarge a poster slightly when the item receives focus, while simultaneously shrinking the poster of the previously focused item, you could set up an <interface> element focusPercent field  onChange callback function showfocus() in the item component XML file:

The RowList node class also includes the rowFocusPercent field to allow animating a focus indicator when the user focuses on an item in an adjacent row, either above or below the previously-focused row.

Optimizing the Rendering Performance of Lists and Grids

There are two advanced methods to optimize the rendering speed of complex lists and grids.

Lists and grid items can contain several sub-elements (such as rental/purchase prices, MPAA rating icons, and so forth) that can be drawn on top of or adjacent to the item. The default method of drawing list or grid items is to render all of the items and any sub-elements in one rendering operation. For complex lists or grids with several sub-elements drawn for each item, this default method may render the list or grid slowly. To increase the performance of rendering complex lists and grids, there is a special field in list and grid nodes, numRenderPasses, that controls the rendering of the list or grid items in conjunction with the renderPass field of the item sub-elements.

You can optimize the rendering speed of grids that have poster items of several different sizes, or are very large, by setting the grid useAtlas field value to false. The field value toggles the use of a texture atlas that stores the posters in the grid. The default is true, since in many cases, most of the posters in the grid have the same size as determined by the grid basePosterSize field value. In this case, using the texture atlas can provide a rendering performance benefit. For grids that have more complicated layouts, that include several posters that have sizes that differ from the value of basePosterSize, or for grids where there are only a few large posters (about five to eight, or posters that are about a quarter of the screen height or width) displayed at the same time, setting this field to false may provide faster rendering speed of the grid.